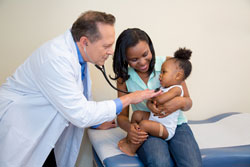 The best way to protect against measles is to get the measles-mumps-rubella shot (called the MMR shot). Doctors recommend that all children get the MMR shot.

Why should my child get the MMR shot?

Is the MMR shot safe?

Yes. The MMR shot is very safe, and it is effective at preventing measles (as well as mumps and rubella). Vaccines, like any medicine, can have side effects. But most children who get the MMR shot have no side effects.

What are the side effects?

Most children do not have any side effects from the shot. The side effects that do occur are usually very mild, such as a fever or rash. More serious side effects are rare. These may include high fever that could cause a seizure (in about 1 person out of every 3,000 who get the shot) and temporary pain and stiffness in joints (mostly in teens and adults).

Is there a link between the MMR shot and autism?

No. Scientists in the United States and other countries have carefully studied the MMR shot. None has found a link between autism and the MMR shot.

Measles is a serious respiratory disease (in the lungs and breathing tubes) that causes a rash and fever. It is very contagious. In rare cases, it can be deadly.

What are the symptoms of measles?

Measles starts with a fever that can get very high. Some of the other symptoms that may occur are:

Measles can be dangerous, especially for babies and young children. From 2001-2013, 28% of children younger than 5 years old who had measles had to be treated in the hospital.

For some children, measles can lead to:

How does measles spread?

Measles spreads when a person infected with the measles virus breathes, coughs, or sneezes. It is very contagious. You can catch measles just by being in a room where a person with measles has been, up to 2 hours after that person is gone. And you can catch measles from an infected person even before they have a measles rash. Almost everyone who has not had the MMR shot will get measles if they are exposed to the measles virus.

Where do measles cases in the United States come from?

How many measles cases are there in the United States each year?

In 2000, the United States declared that measles was eliminated. Measles elimination

means that the disease is not constantly present in this country. Since 2000, the annual number of people reported to have measles ranged from a low of 37 people in 2004 to a high of 644 people in 2014. Most of these people got measles outside of the United States or after being exposed to someone who got measles while in another country. So far in 2015, we have seen many cases of measles that are part of a large, ongoing outbreak linked to an amusement park in California. See more up-to-date information on measles cases and outbreaks.

Where can I learn more about the MMR shot and my child?

To learn more about the MMR shot, talk to your child’s doctor, call 1-800-CDC-INFO, or visit CDC Vaccines for Parents site.

Posted on February 7, 2015 by riversideadmin
Posted in News